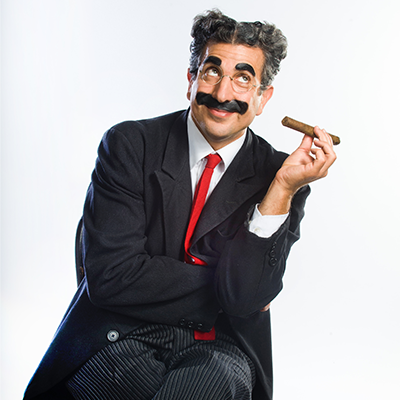 Frank Ferrante - (Groucho) is an actor, director, and producer described by The New York Times as "the greatest living interpreter of Groucho Marx's material." Animal Crackers and A Night at the Opera co-author Morrie Ryskind called him "the only actor aside from Groucho who delivered my lines as they were intended." Discovered by Groucho's son Arthur when Frank was a drama student at the University of Southern California, Frank originated the off-Broadway title role in Groucho: A Life in Revue (written by Arthur) portraying the comedian from age 15 to 85.

For this role, Frank won 1987's New York's Theatre World Award and was nominated for an Outer Critics Circle Award. He reprised the role in London's West End and was nominated for the Laurence Olivier Award for 'Comedy Performance of the Year.' Frank played the Groucho role in the off-Broadway revival of The Cocoanuts and has played Captain Spalding in several productions of Animal Crackers winning a Connecticut Critics Circle Award for his portrayal at Goodspeed Opera House and a Helen Hayes nomination in Washington D.C. at Arena Stage.

In Boston in 1988, he played the Huntington Theatre in the record-breaking run of Animal Crackers that landed Frank on the cover of American Theatre magazine. His other regional roles include Max Prince in Neil Simon's Laughter on the 23rd Floor at Philadelphia's Walnut Street Theatre (which Frank also directed); George S. Kaufman in By George (a one-man play written by Frank); Tom in the farce Perfect Wedding; Oscar in The Odd Couple and leads in The Sunshine Boys, Lady in the Dark and Anything Goes.

Frank currently stars as the comic lead in the European cirque Teatro Zinzanni in San Francisco and Seattle. This year he became a question on the classic TV program Jeopardy. "He took his portrayal of Groucho Marx to New York in 1986." The answer: "Who is Frank Ferrante?  For more information on Frank Ferrante's Groucho, log on to www.grouchoworld.com.