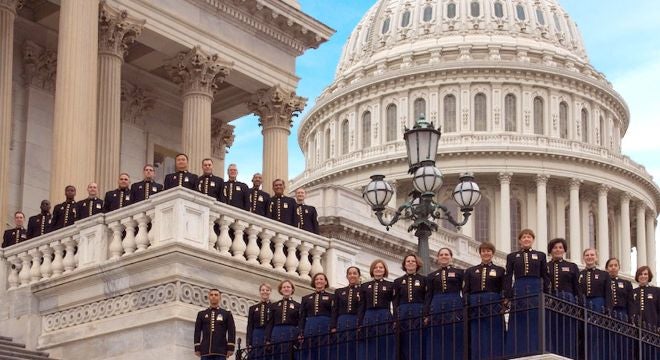 Founded in 1957, the Soldiers’ Chorus is the vocal component of The United States

Army Field Band of Washington, DC. This 29-member mixed chorus travels throughout the nation and abroad, performing both independently and jointly with the Army Field Band’s Concert Band. The Soldiers’ Chorus has performed in all 50 states, Canada, Mexico, India, and throughout Europe.

The Soldiers’ Chorus has collaborated with the Boston Pops, the Cincinnati Pops, and the Atlanta, Dallas, Detroit, Nashville, and National symphony orchestras. The ensemble is a mainstay of PBS’s annual National Memorial Day Concert and has performed for the state funerals of Presidents Ronald Reagan and Gerald Ford.